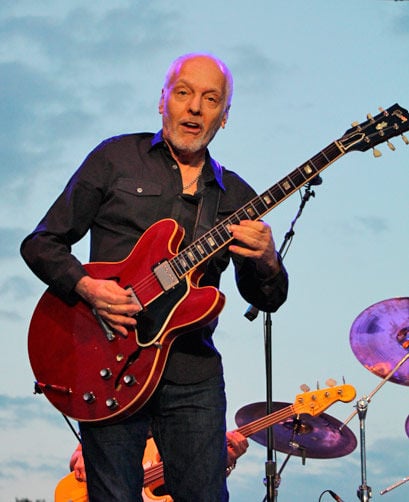 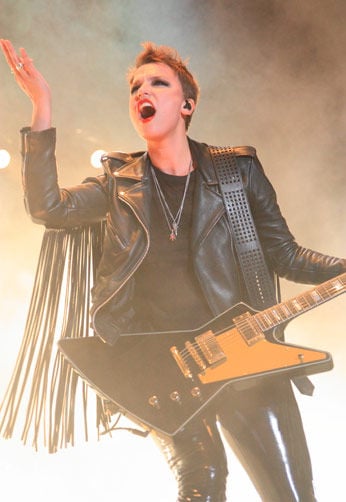 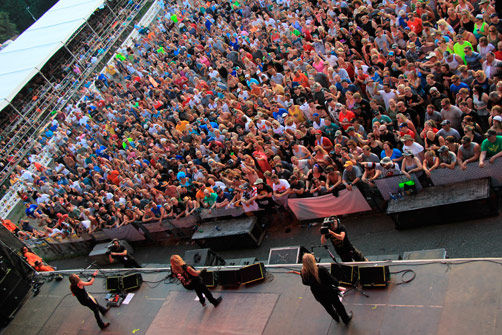 Moondance Jam 26 ended on a high note once again Saturday night as Jammers were treated to great summer weather and some even better rock performances.

Thousands packed the Moondance Fairgrounds to see and listen to Steve Miller and Peter Frampton, two icons in the rock ‘n roll world.

The two rockers, who got started in the business nearly 50 years ago, closed out another successful Jam that has routinely drawn thousands of people to the Leech Lake area for 26 summers.

Kathy Bieloh, the owner of Moondance, said she was happy with the turnout and the performances of the bands.

“Everything went great. Really happy with the weather and that it didn’t cause more problems or damage than it could have on Friday night,” she said. “We had some juggling to do with a couple of bands, but we didn’t lose one.”

She was also proud of the tons of compliments she continues to receive about her staff which, she points out every year, is why so many people keep coming back.

The four-day campin’ and jammin’ event of the summer got off to a great start as a couple thousand Jammers came out for the Pre-Jam Party. Perfect weather greeted the Jammers once again Thursday as five acts played on the Main Stage and several more regional bands played on the other three stages.

The only hiccup at the outdoor musical festival came late Friday afternoon. as hot and humid temperatures led to some severe thunderstorms. But after the strong winds and all the rain and hail subsided, the bands were able to retake the stage and finish the night off strong.

Despite the weather problems on one of the four days, which is normal for an outdoor music concert, the festival ran really smoothly.

“We had some really nice crowds. We didn’t have the ‘Moondance numbers’ we’ve had in some years where the fairgrounds are filled in, but we had a good turnout,” said Production Director Mark Kirchhoff.

Gate receipt numbers are a little deceiving, considering that many people might only come to see a couple of the bands and then spend a lot of their time at their camp site.

“That’s the beauty of the Jam. They might sit at their campfire and enjoy listening to the music,” he added.

What’s next year is going to be like was also on a lot of people’s minds, but just as she did at Jammin Country last month, Bieloh put Jammers’ minds at ease by telling them Saturday night that she has not sold Moondance Jam but has added four new partners.

“I think we’ve cleared the rumors up that Moondance has not been sold. I have partners joining me Aug. 1,” she announced from the Main Stage. “They are fantastic. They love what we love as far as our family atmosphere. They admire my staff because we all care so much about you. You’re not going to notice anything different, other than bigger bands and improvements on the property. It’s all going to be a good thing. They are so excited to be a part of us.”

Kirchhoff echoed those sentiments. “This is great news. They are very excited to be part of the Jam and, what they’ve indicated all along is they want to be a part of it because it works so well. Having the financial ability to make bigger and better improvements is great. Take what we have, which is a great event, and make it even better.”

Vince Neil of Motley Crue and Halestorm on Thursday night, Live and Melissa Etheridge Friday night, and Better Than Ezra, Peter Frampton and Steve Miller all had great performances.

It was the first time Halestorm, Live, Etheridge and Better Than Ezra have performed at Moondance, and by all accounts, the Production Staff and jammers were impressed.

Estimates put the crowd size somewhere near 14,000 Thursday night; and while Friday didn’t get off to a good start, it did end on a high note.

Straight-line winds that hit 60 mph, thunderstorms and lightning caused problems and forced the Production Crew to close down the stage area. They had to wait about an hour for lightning to move out of the area and for some areas to dry out before they could resume getting ready for the next band. That delay forced a change in the line-up.

Black Stone Cherry, who did not complete their set the last time they were at Moondance because of bad weather, was moved from the Main Stage to the Saloon Stage later Friday night. That allowed Etheridge to still take the stage on time at 9 p.m. with Live ending the night.

Bieloh said many of the performers were easy to work with and some want to come back. She pointed out how nice Etheridge was, and that she commented how much she enjoyed her time at Moondance and would like to return.

Kirchhoff, who is also a guitarist with Mountain Ash, said he was also impressed with Etheridge and  Live’s shows.

The final day of the Jam went smoothly. Kirchhoff said there were no weather problems, and the bands all performed on time, which makes the Jammers happy.

“The amazing thing to me is how fast this year’s event has gone; it’s Saturday already. Where did the week go?” he said.

Bieloh said Saturday night was their largest crowd of the three days, which says a lot about who was performing and that they can still draw big crowds.

“Steve Miller has always been one of my favorites, and it was nice to hear all his great songs,” she said. “Peter Frampton and Better Than Ezra were also great.”

Dancing zombies won the hearts of the judges and were declared the grand champion of the 14th annual Camping Contest.

Set to Michael Jackson’s “Thriller,” the Camp Hippy zombies rose from the grave yard, and in unison began to dance.

Ten camp sites entered the competition under the theme “Live at Moondance.” Judging is based on originality and quality as Jammers decorate their camp site using the theme.

Each of the top four camp sites gets six three-day passes for the 2018 Jam, while the grand champion also received passes Saturday night to watch the band of their choice from the Poser Deck.