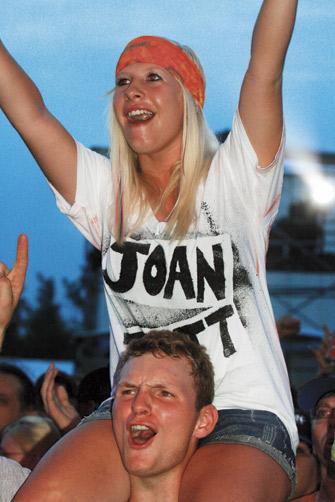 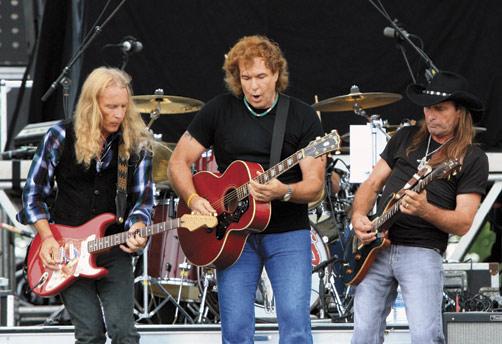 The Outlaws jam in front of large crowd Saturday afternoon. 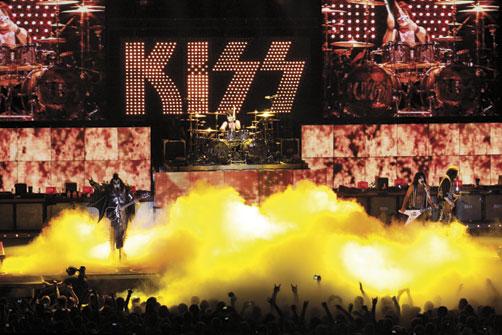 KISS’ theatrical stage performance wowed the 23,000 that came out to see their Friday-night performance. Photo by Steve Loftness 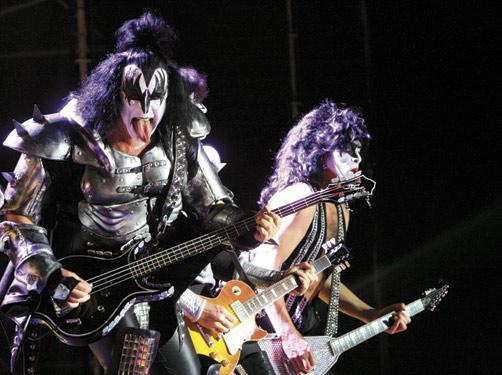 KISS performed before a record crowd of about 23,000 Jammers. 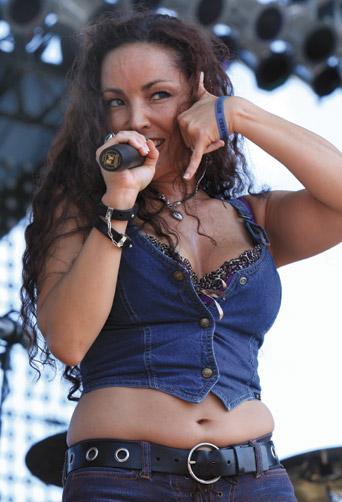 Dyna Shirasaki of ThundHERStruck teases the audience to give her a call. 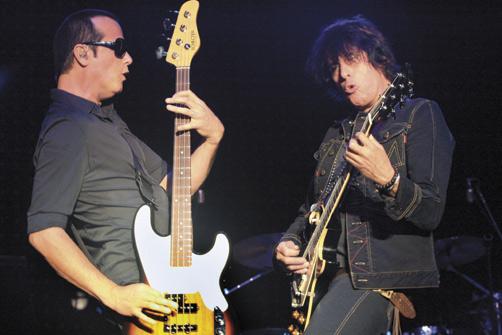 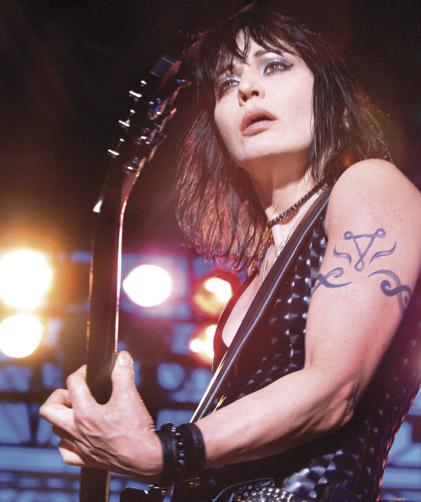 Joan Jett and Heartbreakers made her second appearance and put a great show for about 20,000 Jammers. 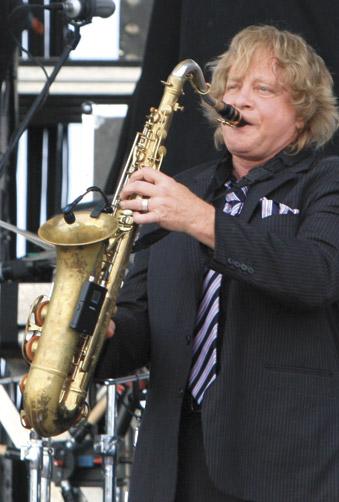 Eddie Money performed at Moondance Jam 20 for the third time. 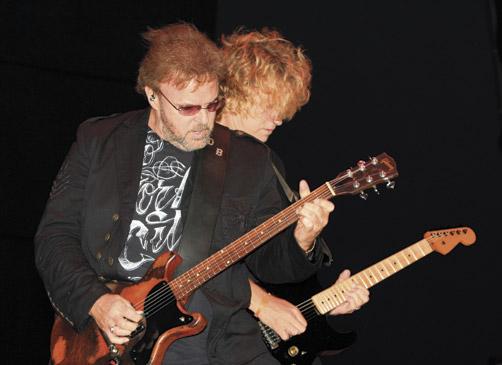 Don Barnes and Danny Chauncey of 38 Special performed on the 20th anniversary of Moondance Jam. 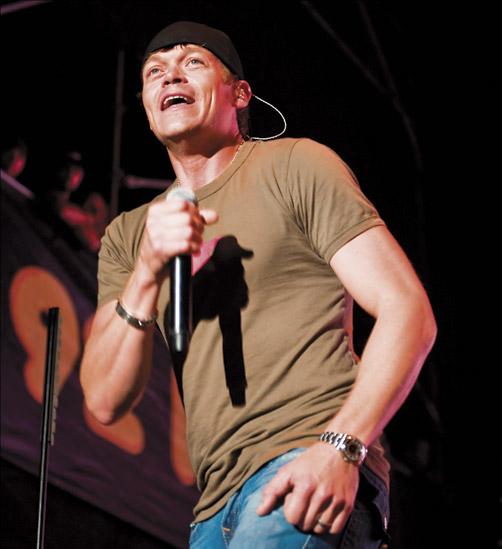 Brad Arnold, the lead singer for 3 Doors Down, closed Thursday night’s Jam, performing in front of about 15,000 Jammers. Photo by Shannon Northbird 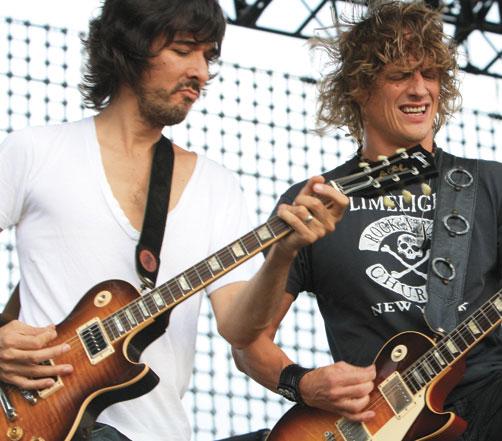 The Outlaws jam in front of large crowd Saturday afternoon.

KISS’ theatrical stage performance wowed the 23,000 that came out to see their Friday-night performance. Photo by Steve Loftness

KISS performed before a record crowd of about 23,000 Jammers.

Dyna Shirasaki of ThundHERStruck teases the audience to give her a call.

Joan Jett and Heartbreakers made her second appearance and put a great show for about 20,000 Jammers.

Eddie Money performed at Moondance Jam 20 for the third time.

Don Barnes and Danny Chauncey of 38 Special performed on the 20th anniversary of Moondance Jam.

Brad Arnold, the lead singer for 3 Doors Down, closed Thursday night’s Jam, performing in front of about 15,000 Jammers. Photo by Shannon Northbird

That’s the easiest way to describe the music, party atmosphere and spectacle at the two-decade anniversary event with a lineup that included KISS, 38 Special, Stone Temple Pilots, 3 Doors Downs, Joan Jett and the Blackhearts, and Paul Rodgers.

Last July, after the 19th anniversary edition of the Campin’ and Jammin’ Event of summer concluded, Moondance founder, the late Bill Bieloh, said he had plans to make the 2011 festival the biggest and best ever.

Bieloh was unable to see the end results, but his presence was felt by all as Kathy Bieloh, her two children, Jon and Bre, and the rest of the staff planned and put together a show that exceeded all expectations and broke attendance records.

“It’s been a long 10 months to get here,” Kathy Bieloh said onstage Saturday night to a crowd of about 20,000 Jammers, referring to Bill’s death last September. “Thank you all so much. You all rock, and you have made this happen.”

Gate totals over the three days, not including Wednesday’s Pre-Jam Party, average just under 20,000, including a whopping 23,000 Friday.

Helping to reach that mark was the signing of KISS, which brought in an estimated crowd of 23,000 — the largest one-day total ever.

“They were great. Loud, but great,” Jon Bieloh stated.

While the weather wasn’t perfect, the rain did not disrupt any of the shows. The hot and humid weather Saturday hurt beer sales, but other than that, everything went very smoothly.

“We fight the weather, but there’s nothing we or the bands can’t handle,” he said.

Jon added that everything is going great. “We haven’t had that many problems and we’ve had some huge crowds. We’re very happy.”

Highlights of the 20th anniversary included a Troop Tribute held Saturday night prior to the final two performers, a Friday night tribute to founder Bill Bieloh and, of course, arguably the best lineup ever assembled for a Jam.

KISS alone brought in seven trucks of equipment, with one dedicated just to pyro, and about 60 people to set up their massive stage.

The Jam got off to a great start Wednesday night as Hairball did their best KISS impression with all their pyro explosions during the Pre-Jam Party, which is a free  admission concert.

“Their mission was to put on a pyro show that would make KISS notice that they were there. And I think they accomplished that,” Kirchhoff stated.

A great crowd came out Thursday despite a steady mist of rain, with the best weather occurring Friday as attendance records were broke.

Kirchhoff said KISS’ performance was historic. “We’ve had some big shows in the past, but clearly this was huge for Moondance, just for the amount of people on site. It was clearly the biggest night Moondance has ever had.”

Jack Thibault who, along with Jack Jordan of  T.E.A. Productions has been provide national entertainment for the event, said Kathy and the Bielohs have done a monumental task in Bill’s absence.

Early indications suggest that the 20th annual Campin’ and Jammin’ event of the summer will return in 2012.

“I’m not saying it’s going to happen, but there’s a good chance,” she said.

KISS was easily the biggest attraction with its onstage theatrics and pyro explosions, but there were plenty of great performances at the three-day festival.

Hairball got the party started with a performance in front of about 5,000 people at Wednesday’s Pre-Jam Party. The band brought out all their costumes and fire ball explosions as the ultimate ‘80s rock impersonators.

The first day got off to an ominous start as steady rain began in the morning and didn’t let up until the afternoon. But it did not affect the performers, as all the bands took the stage on time.

Great White, which celebrated their 25th anniversary back in 2007, showed why they have attained worldwide success as hard rock performers.

The band has been touring heavily over the last three plus years to huge crowds, thanks to such hits as “Once Bitten, Twice Shy,” Face the Day” and Rock Me.”

With Donnie Van Zant and Don Barnes headlining 38 Special, the Southern rockers showed why they continue to bring in thousands of rockers after more than three decades, and easily had the best performance on the day.

The legendary performers, whose 8-track of hits found their way into my vehicle as a teen, include “Back Where You Belong,” “Hold On Loosely” and Rockin’ Into the Night.”

Closing the first night was the Mississippi-born quintet known as 3 Doors Down. Their breakthrough anthem “Kryptonite” put them on the charts, one they haven’t left since.

Since forming in 1995, their arsenal includes more than 15 million albums sold and three multi platinum albums that include “The Better Life” and “Away From the Sun.”

Depending on who you talked to, you would get different views as to who had the best performance Friday.

KISS would easily get the most nods for their jaw-dropping stage show that included explosions, confetti, fog and a huge KISS logo — if, for some reason, you didn’t know who was performing. They played all their greatest hits to an estimated crowd of about 23,000 — not the 35,000 that was posted on the KISS website.

Rodgers, the British rocker known as “The Voice,” has led three bands to international stardom and has continued that with an astonishing solo career.

He has written and recorded 27 CDs and sold 125 million with such hits as “Bad Company,” Feel Like Making Love” and “Can’t Get Enough.”

The final day was kicked off by  ThunderHerStruck, the all-female tribute band to AC/DC — one of the greatest rock bands to date — with a high-energy performance that brought thousands of Jammers out of the campgrounds.

Burton Cummings, who scored an unprecedented string of international hit singles and albums as a member of Canada’s original superstars The Guess Who, kept the crowd rockin’ with such numbers as “These Eyes,” “American Woman” and “Stand Tall.”

Fuel, the last band signed for this year, was up next. They have sold out tours all over the world headlining venues and opening for bands that include Aerosmith, Kid Rock, Creed and 3 Doors Down, and they didn’t disappoint with their hits “Falls On Me,” Shimmer” and “Innocent.”

But the night belonged to Joan Jett and Stone Temple Pilots. Jett, who performed at Moondance back in 2003, performed all her greatest hits that was recently released in a two-disc collection.

Her three-decade career, that began when she was 15 as co-founder of the Runaways, had all the punk rockers singing to “I Love Rock and Roll,” Crimson and Clover,” Bad Reputation” and “I Hate Myself For Loving You.”

Chants of “STP” (Stone Temple Pilots) were heard for more than 30 minutes before the band — which has won the Grammy for “Best Hard Rock Performance” — took the stage.

Since they first formed in the 1990s, they are one of only a few bands from that era with all the original band members. About 20,000 Jammers packed the fairgrounds to see STP.

The Jam is not just about the music; it’s also the ultimate camping experience.

For about eight years now, a contest has been held to determine which Jammers decorate their sites the best.

Preliminary judging was held Thursday with 32 camp sites visited. That number was trimmed to 13 as Kathy Bieloh and the judges made their way back to visit all the campgrounds Friday afternoon.

Getting the nod from the judges was “Kryptonite Bar” in North Reserved camping. The campers, all Princeton grads, dressed up as superheroes.

The three runnerups were “Who Made Whoville,” a Dr. Seuss theme; “Moonliters,” with a Dr. Love theme; and “Camp Ecnadnoom (Moondance spelled backwards),” a tribute to Bill Bieloh and the previous 19 Jams.

All four sites receive six tickets to next year’s Jam, with the winners receiving passes to Billy’s Backstage Bar and access to the stage box to watch a band perform Saturday night.

The Kryptonite camp chose to watch Joan Jett and the Blackhearts.