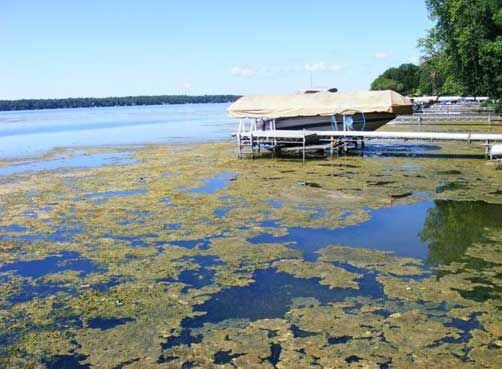 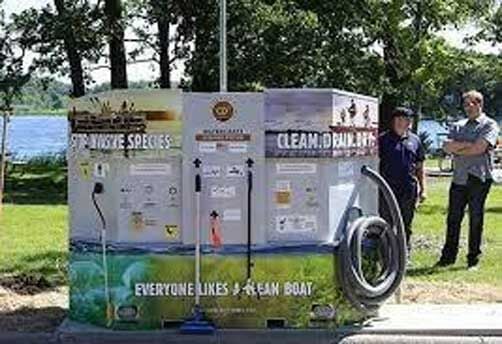 This summer, the lakes in Cass County are likely to get increased protection from Starry stonewort, a dangerous and relatively new aquatic invasive species (AIS).

$1 million in funding has been included in the House and Senate Environment and Natural Resources Trust Fund (ENRTF), which would put five boat-cleaning stations on each access on every lake that has been infested with Starry stonewort.

“This is an imperative containment strategy,” said Jeff Forester, executive director of Minnesota Lakes and Rivers Advocates (MLR), which submitted the grant proposal to the Legislative Citizens Commission on Minnesota Resources (LCCMR), which reviews grants and makes recommendations to the Legislature on how to distribute the proceeds from the Minnesota Lottery.

“Research shows that lakes within a 50- mile radius of an infested waterbody are at much higher risk of infestation,” Forester adds. “By containing Starry stonewort in the few lakes where it already exists, we hope to protect all of the other lakes in the county.

Risks to both lake ecology and local economies

Starry stonewort is an exceptionally dangerous AIS, expensive and difficult to manage with mechanical removal or chemicals, and easily spread by boaters. It is a relatively new-to-Minnesota AIS, and it is perhaps the most concerning one in the state at present. For example, in 2015, a 260-acre patch of starry stonewort was discovered in Lake Koronis in Stearns County, near the DNR water access site. By spring 2016 starry stonewort covered thousands of acres along the shore.

The foundation of economies in the lake districts of Minnesota are largely lake-based tourism. Starry stonewort, more than other AIS species in Minnesota, poses significant risks to this tourism. In many of our rural counties, lake shore property makes up more than 50 percent of the tax base.

Thus, it poses significant risks to both lake ecology and local economies:

• It is an algae and not a vascular plant, and so is more difficult to control with chemical treatments.

• It can grow on many different substrates, but prefers gravel and sand bottoms, i.e. spawning habitat.

• Its growth response is triggered by the same water temperature that triggers panfish and bass reproduction.

• It is threatened in its native range because Starry stonewort prefers high quality waters,

• Lake Koronis spent over $800,000 to treat the infestation the first few years and now spends over $200,000 annually to keep the public access open for use.

• Real estate agents in the area are starting to notice impacts to both sale prices of lakeshore properties on Koronis and time-on-the-market before sales.

Many studies have found that Minnesota has effectively communicated the need to clean, drain, and dry water-related equipment when moving it between water bodies. Almost all boaters are aware of the steps they need to take — and the reasons why. Yet these same studies confirm that we have been much less successful at changing behavior. Even though most boaters know what they need to do, a much smaller percentage consistently take all the required steps. The question is why?

A study for the Canadian Council on Invasive Species found that the most common answer boaters gave in a survey for not fully cleaning, draining and drying their boats was a lack of equipment.

“Imagine asking your high school-age child to clean their room, but did not give them access to a vacuum cleaner, broom or cleaning spray and paper towels. A difficult task has now become impossible,” notes Forester.

The solution funded by the ENRTF bill is simple, provide the tools people need to do the right thing at the places they need them — on the boat ramps. With enhanced signage, pavement markings and easy-to-use boat-cleaning stations, Hennepin County has shown that AIS violation rates for weed and plug removal can be decreased by 70 percent.

Boat cleaning stations have been piloted in Minnesota since 2017. There are multiple stations already in use at DNR, County, Federal and local government unit access sites both in Minnesota and nationwide. Canada is currently in the process of considering use of boat- cleaning technology in their AIS programs.

The ENRTF bills currently in the legislative process not only represent many local jobs, but also go a long way towards protecting the lakes, rivers, streams forests and prairies that make Minnesota such a special place to live.