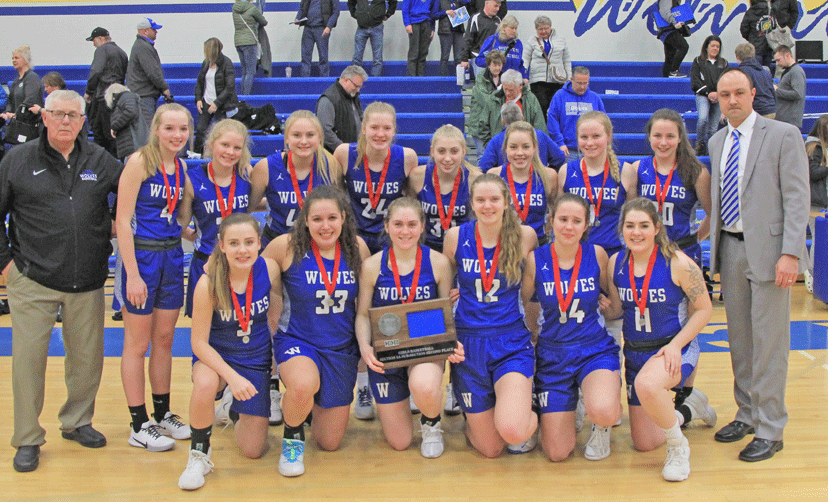 The Lady Wolves’ quest to make it to the State Basketball Tournament for the first time in school history came up short in the Section 5A West championship last Wednesday night.

No. 2 seed Belgrade-Brooten-Elrosa, with many of the same players who denied the Wolves a trip to the State Volleyball Tournament back in November, outscored WHA 46-25 in the second half — including a 10-0 run to end the game — for a 76-58 win.

Two nights later, the Jaguars trounced Ogilvie 67-25 in the Section 5A title game.

Walker-Hackensack-Akeley, who came in as the No. 1 seed with a 27-2 record and ranked No. 3 in Class A, had a hard time adjusting to the Jaguars’ pressure defense and physical play. It didn’t help that the Wolves shot only 34 percent from the field and turned the ball over 10 times in the second half compared to only four for the Jaguars.

Questionable officiating also played a huge part in the outcome and swung the momentum in favor of the Jaguars early in the second half.

With the Jaguars clinging to a 42-41 lead and with play stopped, a sixth player ran onto the court without the horn sounding or an official motioning for her to come in. After getting near mid-court, she turned around and ran back off to her bench right past one of the three officials. Instead of automatically signaling a technical foul, the official walked over to the scorer’s table.

While the discussion was going on at the scorer’s table and with Coach Jim Lien looking for an explanation, one of the other officials handed the ball to the Jaguars to pass in, which they did, only for play to be stopped again since the one official was still talking at the scorer’s table.

What was said is not known, but instead of WHA shooting two free throws and retaining possession of the ball, the Jaguars got the ball instead. They ended up scoring a basket and proceeded to go on a 15-3 run to take control of the game.

Ally Sea’s 12 first-half points kept WHA in the game and allowed them to take a 33-30 halftime lead.

The only other players who scored for WHA was Emma Deegan making two second-half three-pointers, and senior Bailey Nornberg coming off the bench to score five points.

Jenna Dingmann was the only Jaguar starter to finish in double figures, scoring 25 points including five three-pointers. Abby Berge and Karsee Kampsen came off the bench to score 15 and 12 points, respectively.

Nerves appeared to affect both teams early in the first half, but two straight blocks by Benjamin woke up WHA’s fans and the bench. After Dingmann’s three-pointer gave the Jaguars a 5-1 lead, Sea followed with two free throws. Benjamin’s baby hook a short time later tied the game.

Over the next couple of minutes there were two more ties and two lead changes, with WHA taking a 12-11 advantage on Sea’s three. The Jaguars would scored 14 of the next 18 points to grab a 25-18 lead as WHA had trouble with the press and kept turning the ball over.

With under six minutes left in the half, Benjamin’s bunny got WHA back on track, and she followed that with two free throws.

Of the 19 turnovers in the first half, WHA only had eight, but two straight led to an easy lay up and 1-2 free throws for a 30-22 lead. But those were the final points the Jaguars would score in the half as the Wolves closed on an 11-0 run.

Bailey Nornberg’s three-pointer with 2:53 on the clock got the run started, with Sea following with another three. On the next possession, Sea grabbed an offensive rebound and found Raddatz alone outside the arc. Her three-pointer gave WHA a 31-30 lead. The final two points were scored by Benjamin at the foul line with about left to go.

Day scored WHA’s first eight points of the second half as she made the first four shots she took for a 41-35 lead. The Jaguars first points came on a three by Dingmann, and the senior would hit another one cutting the lead to 41-38 three minutes into the half. A four-point play by Gracie Nelson on the next possession gave the Jaguars a 42-41.

Other than Day, WHA couldn’t make a shot early in the second half. The Jaguars’ physical play had an effect on the Wolves’ turning the ball over or getting good shots and to the basket.

After the Jaguars’ 15-3 run opened up a 57-44 lead, Nornberg made a jumper and Deegan swished a three. The Jaguars began to be more patient on offense, milking the clock.

With 4:12 remaining the lead was 12, but a basket by Benjamin at the 3:40 mark and a rainbow three by Day 30 seconds later cut the lead to eight.

The Jaguars closed the final 2:56 by making 12-14 free throws, while the only basket WHA made was by Raddatz with 2:43 remaining. The Wolves missed their final four shots and turned the ball over once.