Now, more than ever, the world needs trustworthy reporting—but good journalism isn’t free. Please support us by making a contribution. 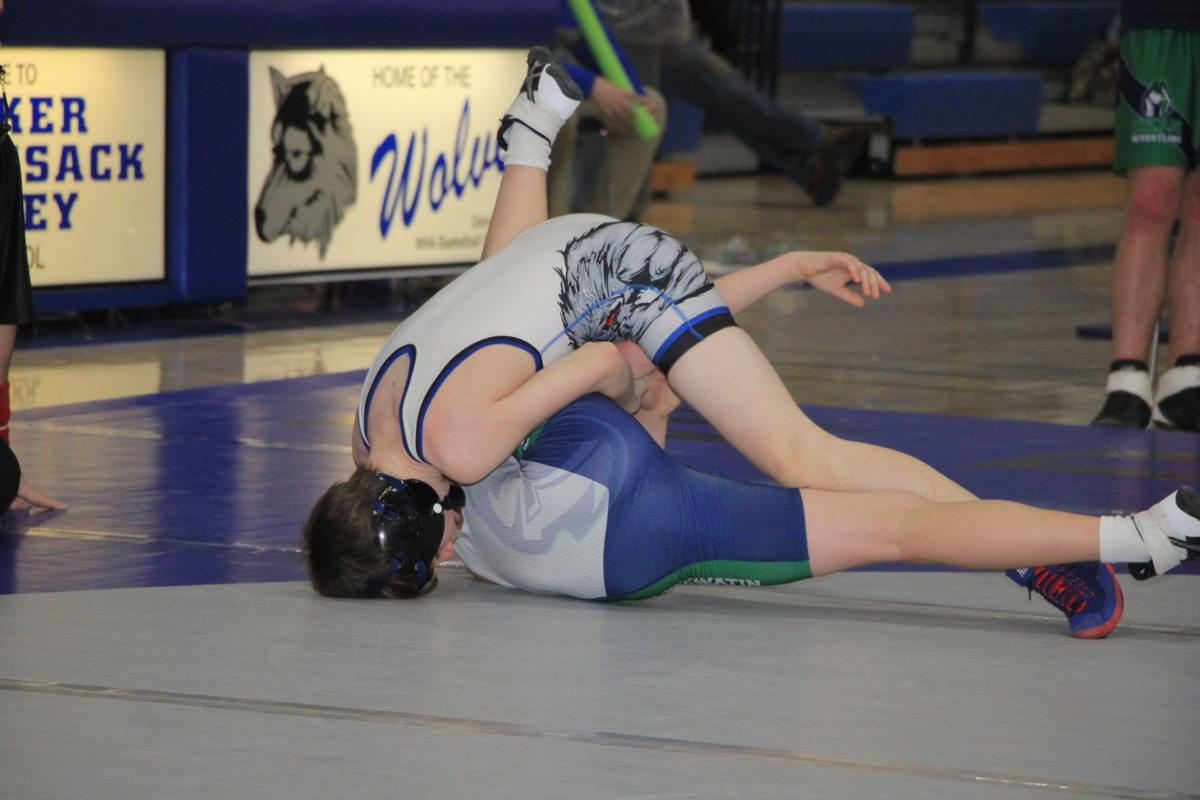 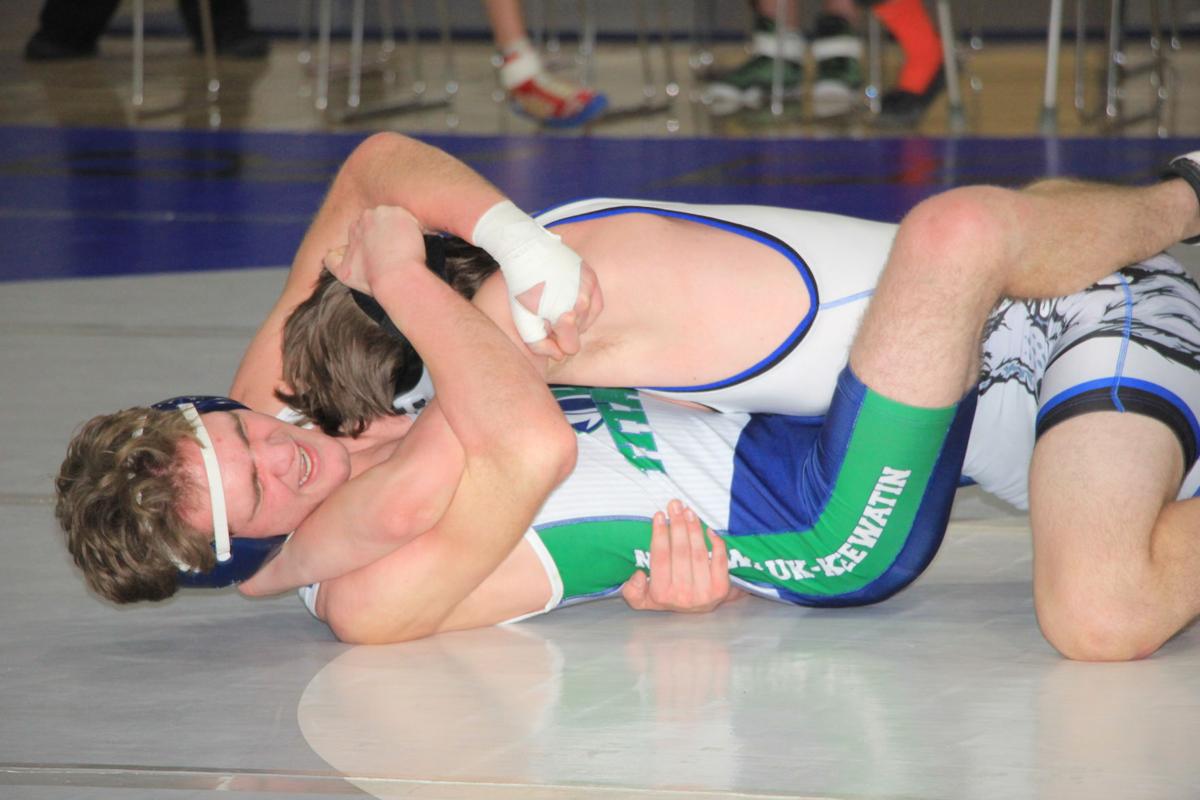 Dawson McGee was the only Wrestling Wolf who medaled Saturday at the 62nd annual Skip Nalan Invitational in Grand Rapids.

McGee went 4-1 on the day, with his only loss in the 106-pound quarterfinals against Daunte Yost of Fosston-Bagley. Yost scored a questionable take down in the closing second for a 3-1 win.

Yost went on to take second, dropping a 7-5 decision in the title match, while McGee won his next three matches.

Three of McGee’s wins came by fall including a pin over Zachary Ikola of Deer River in the fifth-place match.

Winning matches but coming up short of placing were Eli Johnson at 113, Callen Whitney at 120, Alex Hein at 132 and Kolby Hamblin at 182.

Johnson won his first match by fall, but lost his next three by tech fall, pin and a 10-9 decision, respectively.

As a freshman, McGee leads Walker-Hackensack-Akeley-Nevis with 20 wins, Whitney has 14, and both Hein and Hamblin each have 10 wins.

As as team, WHAN took 14th place with 31 points. Grand Rapids Black won the 18-team meet with 193 points. Deer River was a distant second with 155 and Fosston-Bagley took third with 143 points.

The Wrestling Wolves host the annual WHA Invite Friday night. Next week they travel to Lake Park Audubon for their final dual of the regular season.

The Wrestling Wolves won their third dual of the season Thursday night, splitting a home triangle.

McGee won both of his match by major and decision, Hein and Smith had two wins by forfeit, with Eli Johnson and Jonny Johnson both winning a match by decision. Whitney, Devin Johnson, Drew Fields, Hamblin and Patten each had a forfeit win.

Wesley Johnson led both of his matches but couldn’t hold the lead. In his first match against Weston Marx of Nashwauk, Johnson was leading 8-7 until a reversal late in the third period gave Marx a 9-8 win.

In his second match, Johnson had Tegan Larson on his back in the first period but couldn’t get the pin. Larson got the win with a second-period pin.

Against Fosston-Bagley, the Wolves only won three matches. McGee opened with a 10-2 major over Aiden Wolfe, with Hein at 132 and Smith at 195 winning by forfeit.

The most exciting match came at 120 with Whitney dropping a 15-10 decision to Zach Thompson, a fellow seventh-grader. Thompson led 6-4 entering the third and quickly went up 10-4 before Whitney scored the next five points and had Thompson on his back before he countered with a reversal and near fall for the final points.

WHAN and three other wrestling teams converged on Crosby-Ironton Jan. 21 for a quad.

The Wrestling Wolves led early in each match but because of forfeits lost all three. Mille Lacs won the opener 51-22, Crosby-Ironton beat the Wolves 45-19 and Holdingford won 51-15.

Hein, Eli Johnson, McGee and Whitney each went 2-1, with Johnson getting pins in both of his wins. McGee had two major decisions, and both Hein and Whitney had a pin fall.

Those also winning a match were Smith, Devin Johnson and Patten.

Against Mille Lacs, McGee opened with an 11-1 major over Zach Remer. After Eli Johnson lost a 14-9 decision, Whitney pinned Landon Remer in eight seconds, the fastest pin of the night.

Two matches later Hein won by forfeit for a 16-9 lead. Mille Lacs won the next five matches — three by forfeit — with Smith getting the Wolves final six points with an 18 second pin over Warren Minneko at 182.

Facing Crosby-Ironton next, McGee won the first match with an 11-1 major over Dillan Barna and Johnson pinned William Erickson in 25 seconds. At 120, Whitney trailed Gabe Ridlon 5-2 entering the third but got an escape and take down to tie the match. After a reversal by Ridlon, Whitney received a point for an illegal move and nearly had an escape to force overtime, but time ran out in the 7-6 loss.

The Wolves’ two other wins came at 138 when Devin Johnson won by forfeit and Patten won by decision at 220.

In the final dual, McGee lost a 10-4 decision to Drew Lange, but Eli Johnson followed with a pin of Evan Petron in the second period and Whitney won with an 8-5 decision over Cohl Clear for a 9-3 lead.

Hein’s pin of Luke Bieniek in the second period gave the Wolves a 15-3 lead, but Holdingford would win the next eight matches with five by fall and three by forfeit.