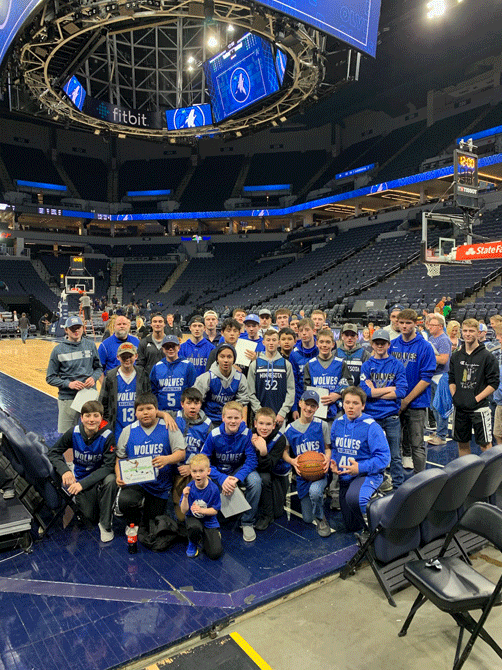 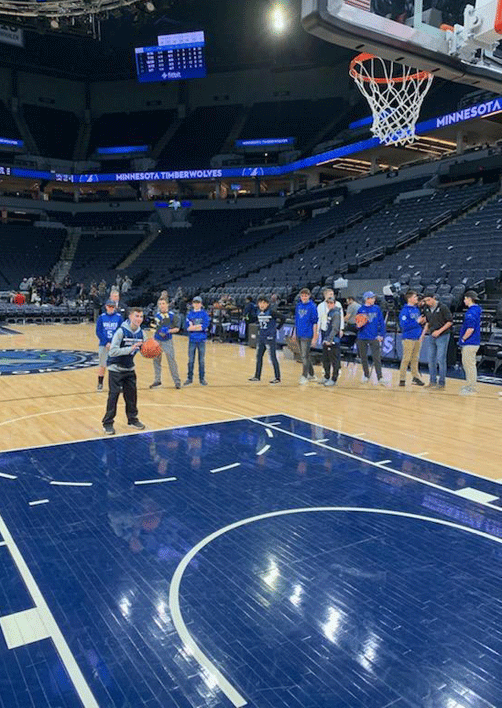 This was a special day for the team that was made possible by local donations from Bank Forward, Walker Rotary, Leer Title, DW Jones and Cedar Point Realty. For the Walker Wolves, this was a great way to celebrate the conclusion of the 2019-20 season. The entire cost of the outing was covered for seventh through eighth-grade players, and the upperclassman paid for their ticket costs.

The day started early Sunday morning as the team met at WHA at 8:30 a.m. It was daylight savings day, so needless to say when it was time to leave we found out a few players were still in bed. Luckily we had time to spare and were able to get the whole team on the road shortly after 9.

The team traveled to the Twin Cities in style with a motorcoach from the Bemidji Bus Service. For most of the players, this was their first time to attend an NBA game. The excitement was high and the bus was full of energy.

There were 30 students, five coaches, the WHA Athletic Director and a 5-year-old aspiring WHA basketball player on the bus.

We had a special day planned for the boys with a pre-game pass to watch the players warm up courtside, and after the game, each WHA player was able to shoot a free throw on the court.

This was a special game as NBA rookie sensation Zion Williamson, who plays for the Pelicans, was playing and everyone wanted to see the NBA’s newest talent in person.

Upon arriving in Minneapolis we parked the bus a few blocks away from Target Center and got a chance to see some of the city and stretch our legs. We were greeted in the lobby by Timberwolves representative who handed us our tickets and took us in for the pre-game warm-ups. As we were walking in everyone noticed who was on the court, Zion!

We sat down and got to watch him prepare for the day’s game. Also on the court was the Pelicans’ Lonzo Ball and Timberwolves’ new star player D’Angelo Russell. You could not have timed this better. We all watched in awe as the players got ready for the game.

After about 20 minutes we made our way to our seats as the WHA players got some pre-game snacks and checked out the stadium.

The game was about to start and the seats started to fill up. The game was sold out due to the opponent’s star player, not the home team’s success or lack thereof this season.

The stadium lights turned off and the show was about to begin! The pregame player introduction is always a fun exhilarating part of the game, with music, videos and a lot of cheering! Once the game began it didn’t take long for Zion to show off his impressive skills.

One of the first plays of the game was an alley-oop dunk pass from half-court. We all watched in amazement and thought, did that just really happen? That was the first of many highlights from the star rookie!

As the game went on it was clear that the Timberwolves were outmatched. That didn’t seem to matter much to our kids, dancing around and trying to get on the Jumbotron was the new goal for the day!

After the game, we made our way down to the court as the stadium emptied. Each player was able to take a shot from the free-throw line on a real NBA court.

The day was a great success. All the players were extremely well-mannered and the experience is one they will never forget.

We made our way back to the bus and started our way back to Walker, and the traditional team McDonald’s stop. The players were full of smiles, jokes and chicken nuggets.

In light of the recent COVID-19 pandemic, this trip was very timely and a great way to celebrate time with each other and to appreciate all we have been accustomed to enjoying in our great country. Again, I want to say a big thank you to the people who supported this event, and the coaches and families who support the youth in our area. We live in a great community filled with people who truly care for one another.