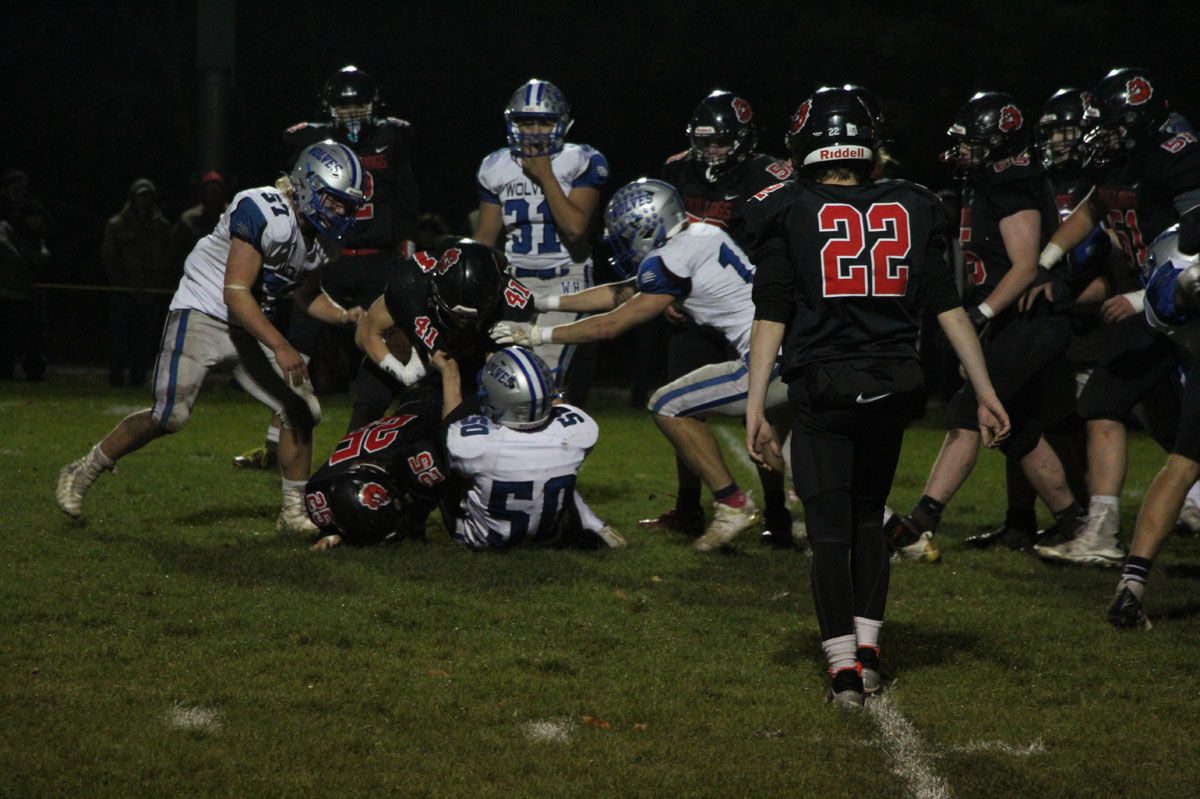 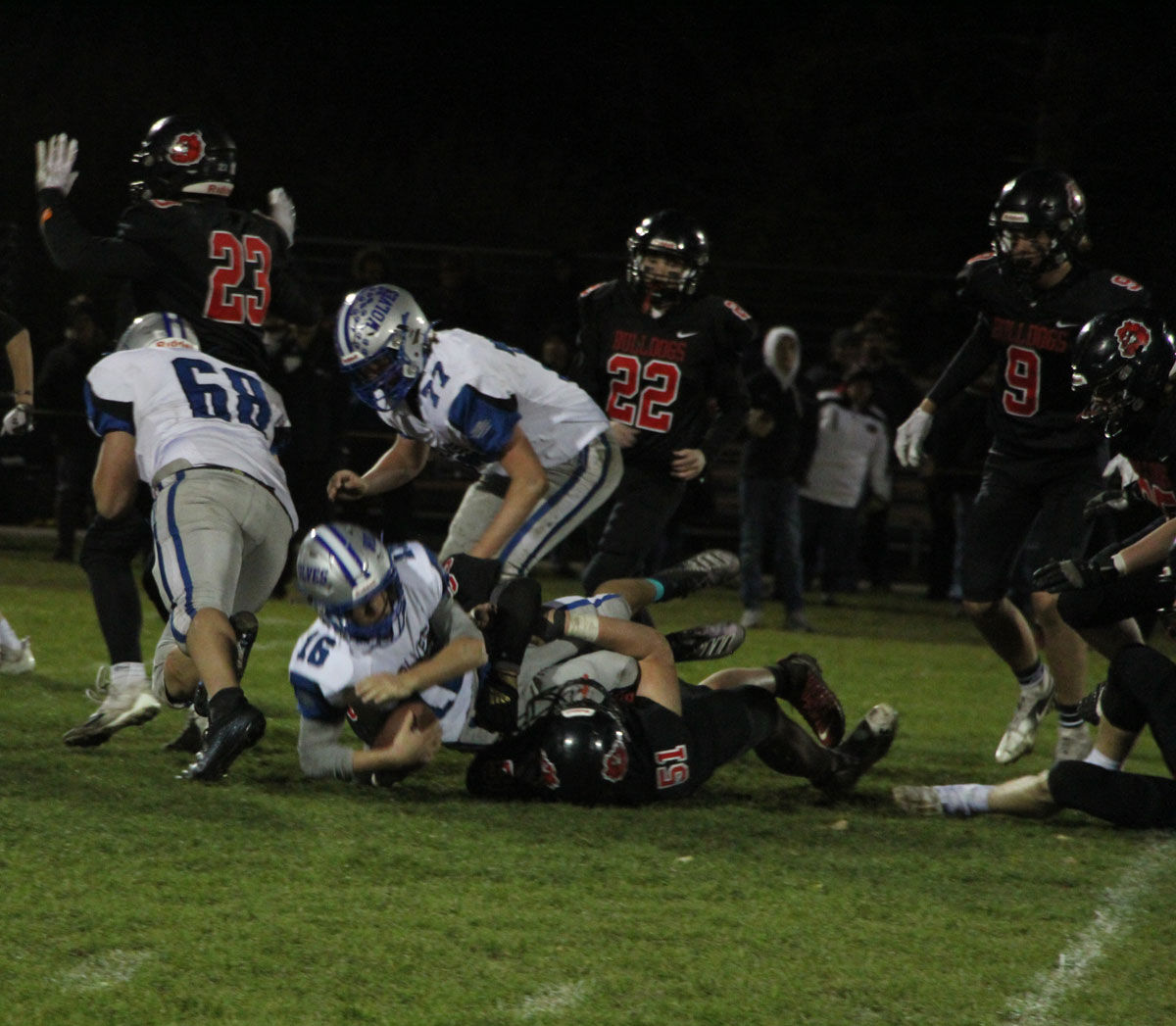 The Wolves’ defense forced two fumbles on the game’s opening drive of the Section 6A playoff game played Oct. 26 in Henning, but Ottertail Central maintained possession both times and ended up scoring on a fourth-down one-yard run.

Walker-Hackensack-Akeley was not as fortunate the first time they had the ball as they turned it over on their second play. The Wolves coughed it up twice more in the first half and that was all the Bulldogs needed as they scored five times in the first half on their way to a 42-7 win in the first round of the football playoffs.

In addition to the three first-quarter turnovers, WHA only had 47 yards of offense in the first half and only one first down. The Bulldogs, however, had 272 yards and scored five touchdowns for a 36-0 halftime lead.

The Wolves’ only score came early in the fourth quarter as Kai Ashmore scored on a four-yard run with Devin Johnson adding the extra point. The Wolves finished the game with 120 yards of offense compared to the Bulldogs’ 330 yard.

Ashmore finished with 54 yards of rushing on 12 carries, while Logan Watts had 27 yards on seven runs. Ashmore also completed one pass for 20 yards to Carson Strosahl. Strosahl also had three kickoff returns for 78 yards, and Watts one for 33 yards.

In the fourth quarter, Parker Brock completed 2-3 passes for 21 yards, including one for 16 yards to Blake Watson.

On the defensive side, Adam Smith recovered the Bulldogs only turnover on a bad snap.

Leading the team in total tackles were Ficher Smith and Enrique Fineday with 10 each. Strosahl had eight tackles and caused a fumble, Ashmore finished with seven total tackles, Taylor six tackles and a forced fumble, and both Adam Smith and Johnson with four tackles each. Johnson also blocked an extra point.

The Bulldogs won the toss and opted to receive the ball, and after a short return started at the 33. Both Strosahl and Taylor forced a fumble on the drive, only to see the Bulldogs recover both and score on Tyler Christensen’s one-yard run.

On the Wolves’ first series, Joe Turchin forced a fumble on the second play. Four plays later Calvin Stueve scored a for-yard run with Tanner Arndt and Owen Buehler connecting on the two-point conversion for a 14-0 lead.

The next time WHA touched the ball, Jacob Smith’s pass was tipped and picked off by Mason Hammer. On the very next play Stueve scored on a 46-yard sweep around the left end. Hammer also ran in the conversion to extend the lead to 23-0.

WHA turned the ball over on its next drive, but got it back when Adam Smith recovered a fumble at the Bulldogs’ 42. The Wolves were only able to pick up eight yards in four plays with Ashmore getting only one yard on fourth-and-three.

The Bulldogs marched 66 yards in four plays with the big play coming on Arndt’s 47-yard pitch and catch to Buehler for the score.

The next time the Bulldogs touched the ball they took possession at WHA’s 40 after another failed conversion on fourth down. Stueve capped the drive with a five-yard run with Buehler adding the extra point with 1:25 left in the half.

WHA got the ball first in the second half, but after picking up two first downs, turned the ball over on downs. The Bulldogs marched 62 yards in seven plays with Stueve scoring on a 27-yard run.

Watt’s 33-yard kickoff return set up WHA at the Bulldogs’ 45. Six plays later Ashmore scored and Johnson kicked the extra point. That was the last time the Wolves’ starters were on the field as the back-ups played the rest of the game.